In his later years Murakami Kagaku painted a number of works of Mount Rokkō , a mountain with which he had become very familiar. The “spring” of the title refers to the stream which runs through the mountains, which also signifies the coming of Spring. At the time when Murakami painted this work he had left Kyoto, where he spent his student years, and had moved to his parents’ home in Kobe. He was confined to his sickbed many times due to the worsening of his chronic asthma. Although he was able to maintain his artistic production, he was far removed from the center of the artistic community. The present work utilizes many techniques of diluted ink. The mist arising from the bare hillside introduces disorder to the depiction of the mountains in bloom and the flowing stream. This work has been painted with a carefree brush as though it were a reflection of the artist eagerly looking forward to spring, having endured the winter months when he was prone to bouts ofasthma.

Peonies are the first species to come to mind when thinking of Murakami Kagaku’s flowers. Kagaku had favored peonies and camellias for their many petals since his youth. He especially adored peonies, painting them continuously throughout his life to the extent that they were the subject of his final work. In his early period, he preferred painting red-blooming peonies, but after suffering from frequent bouts of illness in his later years he mostly devoted himself to depicting them in ink through subtleapplication of tone and shade. Although painted after the date when Kagaku had begun painting ink peonies, Peonies with Butterflies uses red pigment. The plump, overlapping petals are depicted in ink through a sophisticated technique that brings them to life. Gold pigment has been used for the stamen, as a showy and bewitching ornamentation. The leaves and stems have been shaded entirely in diluted ink and without outlines, which shows the petals to their best advantage, and the ground plane has been omitted. As small butterflies flit about, the painting shows the peonies in full bloom, as though on the border of fantasy and reality.

Siddhartha Meditating under a Tree [1933] 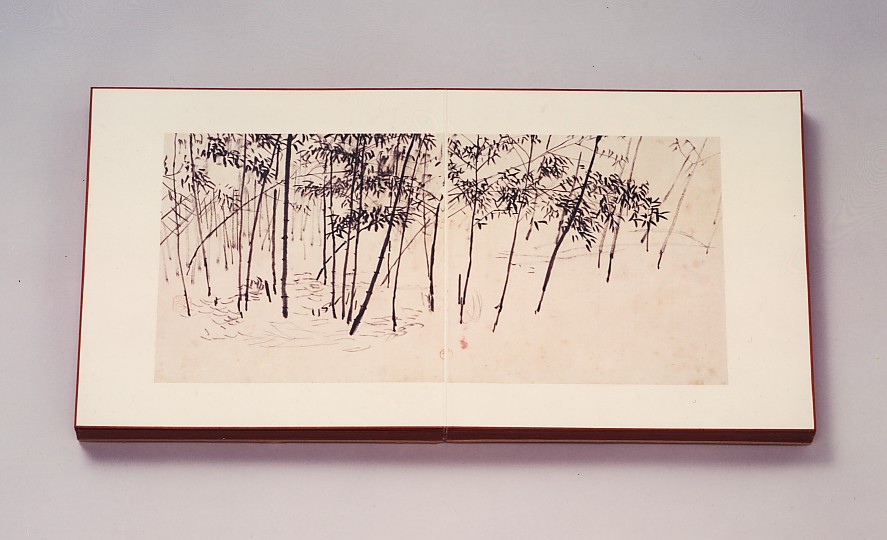