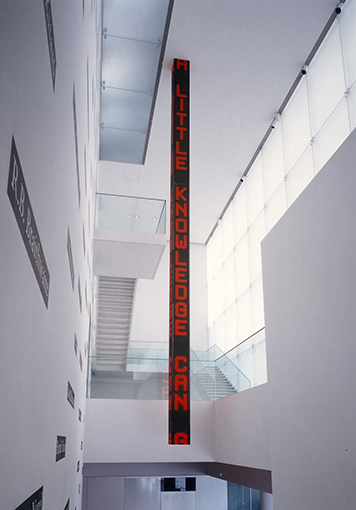 Since the early 1980s Jenny Holzer has been producing electric signboard works that appear similar to advertising slogans, using short sentences of her own composition. This work was specially designed to integrate with the environment of the Toyota Municipal Museum of Art, and features nine scrolling sequences of text in English and Japanese. These short phrases are on various themes, including war, violence, and sex. They include apparently contradictory messages such as “Children are the hope of the future” and “Children are the most cruel of all,” and other candid, extreme statements. However, there is no “I” in these statements. These are not Holzer’s own claims—on the contrary, her desire is to convey anonymous statements that shine a light on our way of being.