As this deer reclines in an autumnal forest, we might wonder what it is thinking of, and what it is looking at. The manner in which the tree trunks and the leaves have been painted strengthen the deer’s sense of isolation. The careful rendering of the deer’s pelt makes it look as though one could reach out and touch it, though the painting is saturated with a sense of tension as if the deer is on its guard and would jump up and run if we did so. In the spring of 1908, Shunso’s eyesight deteriorated due to an illness and he was prevented from making art or consuming alcohol. He was able to fully resume his activities in December of that year. In 1909 he produced several masterpieces based on the forest scenery near to a retreat in the vicinity of Yoyogi, Tokyo. That includes this work, which takes that forest as a setting. The artist was cognizant of the surface and texture of the tree bark and also of the positioning and spatial relationships between the trees. 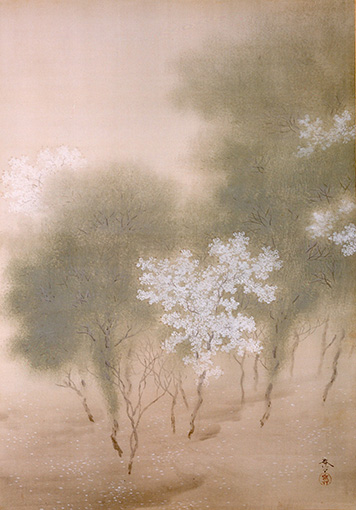 The outlines of the trees evaporate into the misty and hazy light in this unreal painted landscape, inviting the viewer to slumber. The leaves and branches of the trees are all slender, and the ground plane is ambiguous. Amid this fantastical pictorial surface, which is brimming with a sense of coolness, our eyes are naturally drawn to the white flowers as the singular focus of the painting. Along with Yokoyama Taikan and others, at this time Hishida Shunso used the so-called morotai (indistinct) technique in their search for a painterly expression for pigmented, graduated outlines and shading. Although these artists are known today for this morotai technique, at the time they were criticized for it. Underappreciated domestically, for a year and a half from 1904 Shunso and Taikan exhibited together in the United States and Europe. Spring also appears to have been exhibited at that time. During this period, coming into contact with foreign cultures presented an opportunity for Shunso to reconsider the role of his own paintings within Japanese art.