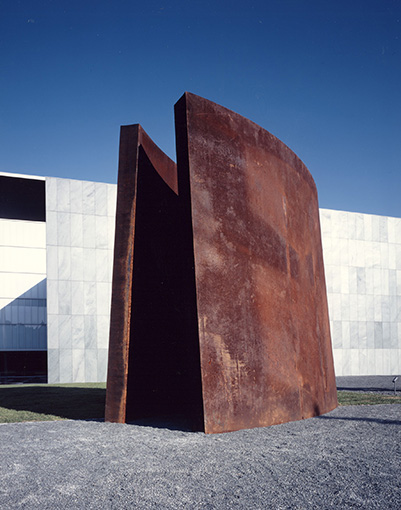 This is the heaviest work at the Toyota Municipal Museum of Art, weighing a total of 60 tons. A sense of tension is established by the contrast between the gentle curve and incline of the work, and the straight lines of the museum buildings. Richard Serra was raised by his father, who worked in an ironworks. Serra himself also performed the same job when he was a young man. He is known for large-scale works that show the materiality of the raw steel and its confrontation with the space around it. Please look at the work from a distance, and also enter the center of the sculpture and look upwards. While you are there, try listening. The sensation will be completely different every time. The shape of the work looks as though it is about to topple over, provoking our anxiety, and being sandwiched in between the steel makes us feel as though we are cut off from the world. This awareness is brought about by the presence of this work. Serra creates his sculptures with a consciousness of this in mind.