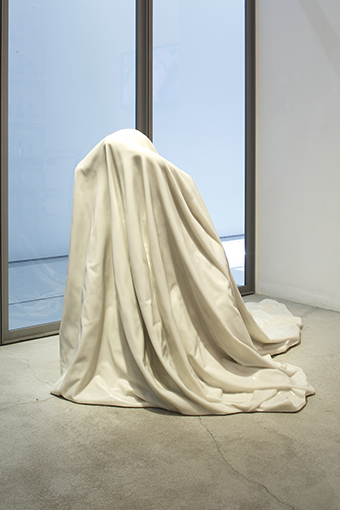 Ryan Gander does not have a set style, but uses a variety of methods and materials including drawing, photography, resin, fluorescent tubes, and even living humans. Furthermore, the disparity between the contents of his works and their titles gives rise to great leaps of imagination. The present work is from a series of marble sculptures showing the artist’s daughter playing at being a ghost by covering herself with a sheet. The series was only made during the period when his daughter believed in ghosts. The folds in the sheet recall the elegant drapery typical of the marble sculptures of ancient Greece and in the baroque era. This unexpected combination of a marble sculpture, symbolizing authority and eternity, with a playful child’s game is amusing. Ghosts only exist for people who believe in them, which overlaps with “Contemporary Art” only having value if we believe it does.