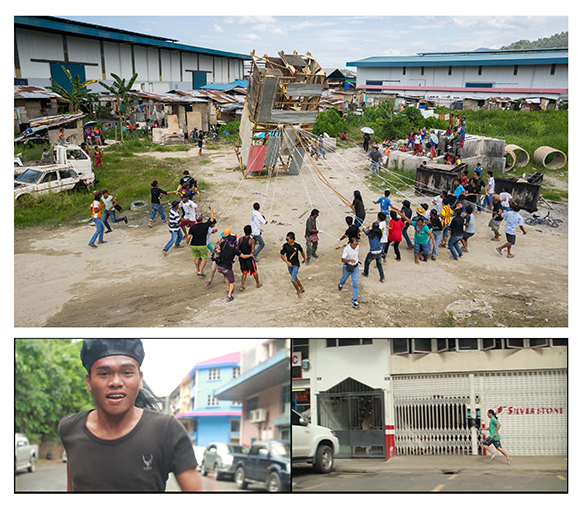 Tsubasa Kato has held a number of art projects both domestically and outside Japan that involve a number of participants working together to erect large structures before pulling them down using rope.              This project took place on the island of Borneo in Indonesia, where descendants of refugees live in villages without citizenship. The government invariably destroys their homes, as they are illegal. Kato built these structures together with the villagers, which resemble their barracks-like homes, for this “raise it up and tear it down” project. Though their houses are destroyed during their forced eviction, the people use the salvaged materials to rebuild their homes in a new location. This performance is repeated over and over again, and the video captures the escalating energy of the participants and their indefatigability.

What are the two characters in this video doing? Who is pursuing and who is being pursued? It could be that they are playing a game of “tag.” This scenario of pursuit between two people is unending, with neither encountering the other. We cannot even clearly see if the pursuer or pursued have caught sight of each other. The setting for this scene is the island of Borneo in Malaysia. While doing research, the artist Tsubasa Kato came to know many of the descendants of the refugees living there, who do not possess citizenship. Kato has said, “Losing citizenship makes a person truly invisible, it makes them non-existent.” One of the two people in the video is without citizenship, shown as if he were an invisible person, rather than just someone without official government documentation.