The scene depicted is the crossing at the river Oi, known as a perilous passage on the Tokaido Road during the Edo period, on the river flowing between the Suruga and Totomi provinces. The liveliness of the river crossing is conveyed through the richly painted appearances of the various travellers, including both well-dressed figures and laborers clad in loincloths. The river flows from top to bottom, with the white-capped waves standing out from the surface and depicted in large arcs that bring a sense of lively motion. Imamura Shiko initially studied under Matsumoto Fuko, a specialist in historic painting. There Shiko learned the importance of both copying from prior works and sketching from life, but in addition he attempted to overcome the fixed notions of painting in the Japanese style by zealous study of painting—ancient and modern, Eastern and Western. His flexible and broad-minded approach is well reflected in this work, as this scene of a water crossing features the relaxed brushwork of the Nanga style and a bright color scheme reminiscent of Western painting. 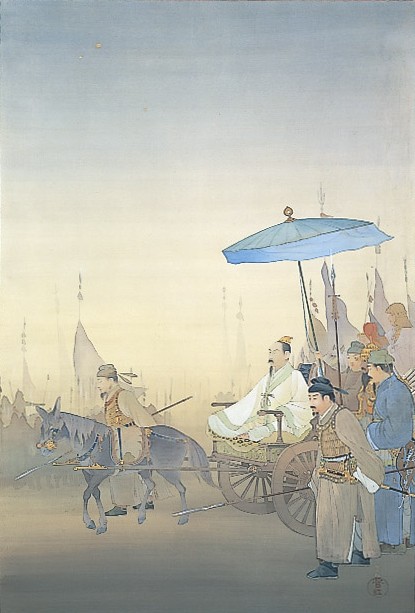 Located in Sichuan Province, the Wu Zhang Plains appear in the classic Chinese novel The Romance of the Three Kingdoms as the site where the minister Zhuge Liang met his death. Under a blinking red star, this work depicts the scene where the Sichuan army surrounds Zhuge Liang’s horse-drawn cart in a solemn procession amid a cloud of dust. However, this Zhuge Liang was in fact a wooden mannequin. The minister had died from an illness on the Wu Zhang Plains, but it is said that in accordance with his will the Sichuan army propped up two gourds in the cart to form a human likeness, giving the impression that the real man was taking command of the corps in the battle in order to deceive their enemies as they made their retreat.     This method of blurring the air is known as moro-tai, or “vague-style.” Imamura’s contemporaries, such as Yokoyama Taikan, employed the moro-tai technique to depict atmosphere and light rays without the use of black lines as they sought to establish Nihonga in comparison to Western art. Painted by Shiko when he was 27 years old, this work combines a well-known scene from The Romance of the Three Kingdoms with the supple lines of the moro-tai technique that he had utilized since deciding to become an artist.